The Utrecht Photovoltaic Outdoor Test facility is installed on top of the Hans Freudenthal building, which is located at the campus of Utrecht University in the center of the Netherlands. The building is eight storeys high and from the roof the horizon is almost unobstructed in the east-south-west directions. UPOT is capable of measuring current-voltage (I-V) characteristics of up to 24 solar panels at the same time. The installed panels use various technologies for converting solar energy into electricity, like silicon (single- and multicrystalline), CdTe and CIS and are all installed at a 37° tilt angle. 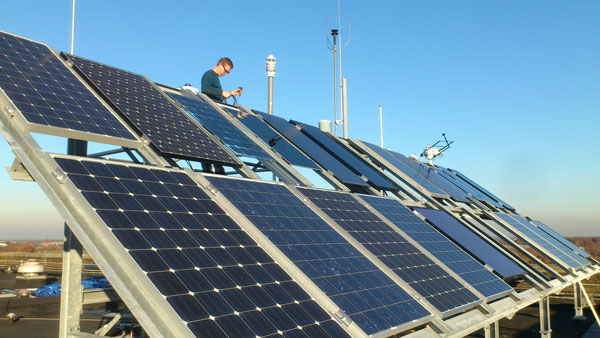 Measurements on the photovoltaic panels are done using an EKO MP-160 curve tracer. The panels are connected via EKO MI-520 PV selectors to the MP-160, so that up to twelve panels per selector can be connected to one curve tracer. Temperature measurements are done using thermocouples, which are connected via EKO MI-540 TC selectors to the MP-160. The curve tracer can measure a maximum voltage of 300 V, maximum current of 10 A and maximum power of 300 W. When the I-V tracer is not doing measurements, the solar panels are connected to two inverters, through power optimizers to output the generated power to the grid. These power optimizers keep the panels operating at their maximum power point, even though there are a lot of different kinds of panels in the set-up. Solar measurements are done using an EKO MS-700 spectroradiometer, which communicates with the PC through its power supply with an RS-232 cable using a proprietary protocol. Measurement time is dependent on light intensity and varies from 10 milliseconds to 5 seconds. The spectral range is 350 – 1050 nm. Irradiation measurements are done using four EKO MS-802 pyranometers, one EKO MS-401 pyranometer and one EKO MS-56 pyrheliometer. The pyrheliometer is used to measure the direct irradiance and is installed on a suntracker together with one of the pyranometers, which is shaded by a shadow ball. This way we can keep track of the horizontal, in-plane, direct and diffuse aspects of the solar irradiation. 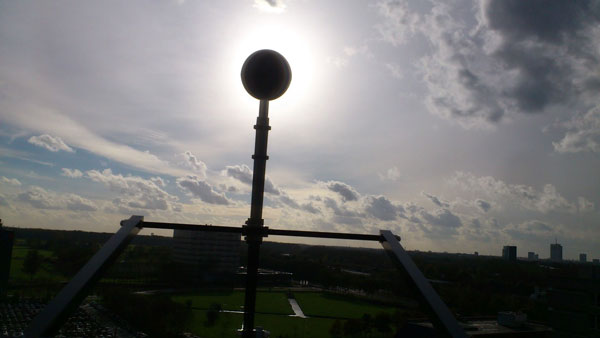 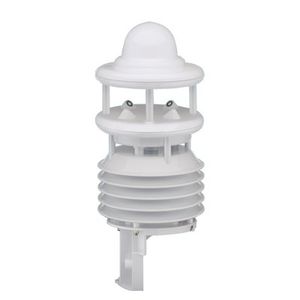 Various atmospheric conditions are measured using a Lufft WS600 weather station, which is connected via RS-485 to a Campbell Scientific CR1000 datalogger. These devices communicate via the SDI-12 protocol, collecting data every ten seconds. Data is read by the PC from the datalogger via RS-232 using the MODBUS protocol. An AXIS M1114 network camera is pointed at the set-up and takes a photograph every minute during the day, so that we can keep an eye on UPOT. Apart from that camera, there is also an SRF-02 all sky camera (cloudcam) set up, which has a 180° field of view and takes full hemispheric pictures at a 2M pixel resolution. The images this camera takes can be used to get a detailed look at cloud cover and even track cloud movement.

The data acquisition is performed using LabView software; all instruments are connected via RS232/Ethernet to a server running LabView. All data is stored on this server in a MySQL database.